We Honor Veterans: Talbot Hospice Celebrates Those Who Have Served 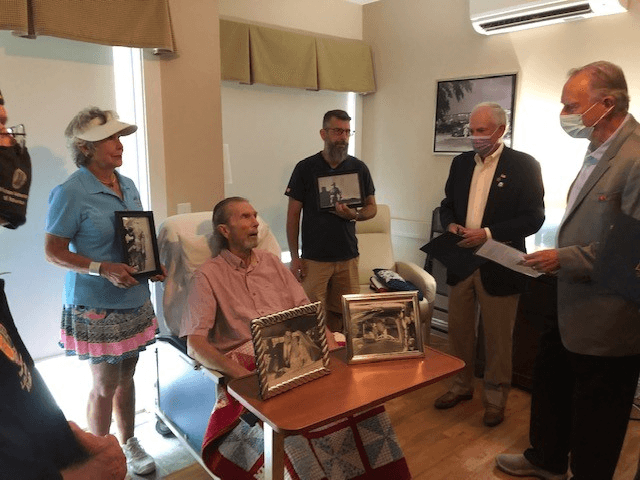 An airy, serene space of love and care, Hospice House is a blessing of a place to spend the last days of life. There are 12 light, art-filled rooms for patients who are respectfully cared for (and pampered) by the nurses and aides who look after them around the clock. The sweet quiet here ebbs and flows with the busy work of the care team. (If it’s close to mealtime, the open kitchen is a-bustle with preparation.) Some of the guest rooms have their doors closed; others have doors open.

On a sunny August day, it is standing-room-only at Room Nine, door wide open, folks chatting.

Gathered are more than a dozen people, filling the room and spilling out into the wide corridor. They are gathered for an occasion rich in significance: a veteran recognition ceremony for 79-year-old Paul J. “Fritz” Moritz, whose service was in the Army in the 1960s. In attendance are family, friends, clinical and administrative Talbot Hospice staffers, a group of veterans from the Vietnam Veterans of America Chapter 648, and—key to the day’s ceremony—two longstanding Talbot Hospice volunteers (also veterans) who will lead the proceedings. Fritz is dressed and in a chair, surrounded by people who deeply care for him. “We felt like we were movie stars,” remembers his wife Wendy (they met when she was eight and he was nine; ice-skating).

Wendy and Fritz married in 1965, it was a storybook romance from the start and remained so. “We never fought,” she says. But later on, they sailed. And sailed. Long hauls—Virginia to Maine was a favorite—and races. The water was why they moved to St. Michaels a few years ago, after having lived in 13 other places.

They were already married when Fritz enlisted in the Army to go to Vietnam. But an injury and bad infection sustained during basic training changed the course of his military life.  Fritz and Wendy would move to Germany, where he would be stationed as an MP. In his obituary, which he wrote (he and Wendy sat down to pen these memorials five years ago), Fritz says: “During his stay in Germany, he acquired two things that lasted him the rest of his life—a love of good beer and a nickname.”

Back at Hospice House, Room Nine, proceedings commenced with a heartfelt reading of a 125-word citation that cites service, sacrifice, dedication, family, and love. “It expresses to the veteran how much his/her service is appreciated by the country and especially those of us who have served,” says Vietnam War Army veteran Richard Miller, who read to Fritz that day. Next in the ceremony, the sharing of gifts—including a one-of-a-kind patriotic red, white, and blue quilt and a small pillow, both stitched by Bayside Quilters. After that comes the particularly poignant offering of a single weathered embroidered star, which comes with the message, “I am part of our American flag that has flown over the USA. I can no longer fly. The sun and winds caused me to become tattered and torn. Please carry me as a reminder that you are not forgotten.” Then there is the awarding of a pin from the Vietnam Veterans of America as well as the WE HONOR VETERANS pin, presented from Talbot Hospice. “I always prefer to give the veteran’s pin to a family member so that he or she can pin the veteran,” says Richard. “The family deserves to do this.”

Yes, the family. “The thing that all of us enjoy about these veteran recognitions is that it gives us a chance not only to honor the veteran but to honor their families,” says Steve Slack, who has been officiating these ceremonies for more than seven years. (Of the various Talbot Hospice volunteer caps Steve has donned—including board member and breakfast cook—his role in recognition ceremonies is the most fulfilling.) Steve points out that the ceremonies can become forums for the sharing of details of a veteran’s service. Sometimes things about their military service are revealed for the first time. Grown children and grandkids are enriched by the knowledge.

The ceremony concludes with what Fritz’s wife, Wendy, deems especially poignant. The salute.

“This is very moving,” says Richard. “The veterans being honored always try their best to return the salute. They might not be able to complete the salute but they still, give it their best. They are proud!” he says.

Steve Slack would like to encourage families to allow a recognition ceremony sooner rather than later. This ritual of closing this meaningful chapter in a hospice patient’s life is richer when he or she can verbalize their thoughts. For many veterans, at this stage in their lives, they are often quite willing to do this,” says Steve. “We just draw them out.  They are the main attraction,” says Steve, who notes that these ceremonies take place wherever the veteran is under hospice care: at home, at an assisted-living facility, nursing home, or at Hospice House.

Veteran recognition is very much a part of hospice throughout the United States. Talbot Hospice is a partner in the We Honor Veterans program, which is a collaboration between the National Hospice and Palliative Care Organization (NHPCO) and the Department of Veterans Affairs (VA).

Brenda Stone, a United States Naval Corps veteran who regularly conducts ceremonies for Talbot Hospice patients, recalls, “My first veteran recognition was for a Vietnam vet who was almost unresponsive due to a brain tumor.  I do believe he heard what I was saying. His wife told me that this was the first time he had been recognized and thanked for his service.”

Key to the spirit and power of the ceremony is the fact that it is conducted by veterans. “There is nothing better than giving back veteran to veteran,” says Chris Schiller, a decades-long veteran of the United State Army Corps of Nurses.

When a ceremony concludes, Richard notes, “the emotions run from quiet/sad/thankful to light/talkative/thankful. Depends on the veteran.”

Recalling that August day when her husband was honored for his military service to the United States, Fritz’s wife Wendy shares this, “It was one of the happiest days near the end of his life.” To be sure, she will hold this day special for always and remember the bittersweet honoring of her beloved husband that took place in Easton’s bastion of compassion.

To learn more about Talbot Hospice, which believes in “knowing us before you need us,” or the We Honor Veterans program, get in touch by calling 410-822-6681. You can also visit our website, talbothospice.org.

- Thank you to Sheila Feldman Buckmaster for telling this beautiful story.