Alice and Jim Clark have always believed in giving back to communities where they live and work. They have specifically chosen organizations that support military veterans and service members, medical research, health care, education and those that benefit the disadvantaged and provide a better quality of life for people. During an interview in 2013, the Clarks said, "We felt it was important to support Talbot Hospice so they could continue their good work to help patients make the most of each day remaining in their lives. 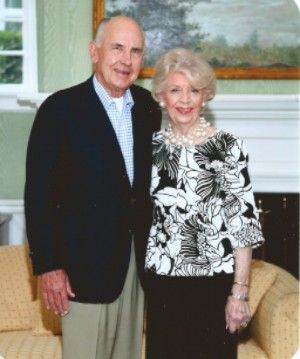 The Clarks have owned a home in Talbot County since the early 1980’s and love its diverse people and history, its art and restaurants, and the splendid rivers and bays that make it unique. The Clarks were just shy of celebrating their 65th wedding anniversary when Jim passed away in March, 2015. They have three children and ten grandchildren. Jim Clark was the founder, Chairman and CEO of Clark Enterprises, Inc. based in Bethesda, Maryland. Among its holdings is Clark Construction Group, a general contracting company. The Clark-Guthrie Center at Talbot Hospice is named in honor of Jim Clark's lifelong friendship with Buck Guthrie, one of the founders of Talbot Hospice.